When you book with an account, you will be able to track your payment status, track the confirmation and you can also rate the tour after you finished the tour.
Sign Up
13

Uncover the cultural highlights and scenic beauty of South India on this private trip. Witness typical, tranquil villages, visit ancient temples and bustling markets in Mysore, and wander amid verdant coffee and spice plantations in Chikmagalur. Gaze in awe at majestic monuments from bygone eras at Hampi and Badami. Top it off with a peaceful stay on the golden beaches of Goa where you while away time sunbathing or set out to explore the region’s Portuguese heritage.

Upon arrival at Bangalore airport meet assist and transfer to hotel. Rest of the day at leisure for independent activities. Overnight at hotel

Breakfast at hotel. After breakfast proceed for Mysore. En-route visiting Srirangapatna. Ranganathaswami Temple is dedicated to the deity of Ranganatha swamy who is a manifestation of Lord Vishnu. Sri Ranganathswami temple is located in island of Srirangapatna near Mysore city in state of Karnataka. Also visit Brindavan Garden.  Continue driver to Mysore.

Mysore (or Mysuru), a city in India’s Karnataka state, was the capital of the Kingdom of Mysore from 1399-1947. In its center is opulent Mysore Palace, former seat of the ruling Wodeyar dynasty. The palace blends Hindu, Islamic, Gothic and Rajput styles, and is dramatically lit at night. Mysore is also home to the centuries-old Devaraja Market, filled with spices, silk and sandalwood. Upon arrival Check In at hotel. Overnight at hotel.

After breakfast proceed for sightseeing tour of Mysore.

Maharaja’s Mysore Palace is a magnificent edifice located in Mysore in the state of Karnataka. Also known as the Amba Vilas Palace, it is the former palace of the royal family of Mysore and is still their official residence. Mysore Palace was built in the year 1912 for the 24th Ruler of the Wodeyar Dynasty and is counted amongst one of the biggest palaces in the country.

Lalitha Mahal Palace Built in the year 1921, it is the second largest palace in Mysore. It was built at the orders of Maharaja Krishnaraja Wodeyar IV of Mysore for stay of the then Viceroy of India. The architecture of the grand palace was inspired by St. Paul Cathedral in London, making it one of the most remarkable structure to grace the landscape of the city.

Sravanabelagola, one of the most ancient Jainist pilgrimage centers in India. Ascent of the 614 steps carved into the rock, which lead to the summit of Vindhyagiri Hill, to admire the 17.5 m tall statue. which represents divinity Gomateshvara.

After breakfast proceed for sightseeing tour of Belur and Halebeedu.

Halebid literally means ruined city because it was ruined twice by the Bahmani Sultanate. Halebidu was previously called as Dwarasamudra and it was the regal capital of the Hoysala Empire in the 12th century. Halebidu is home to one of the best examples of Hoysala architecture in the ornate Hoysaleswara and Kedareswara temples.

Later in the evening return back to hotel. Overnight at hotel

Hampi is a UNESCO World Heritage Site, owing to the ancient temples, forts and other monuments here. Hampi was the capital of the Vijayanagar Empire around 1500 AD, and by some accounts, the second largest city in the world at that time. Over the next centuries it fell out of importance, and now there lie ruins of a lot of temples and other structures spread out over a vast area. Famous for its massive, beautifully carved temples, Hampi tells the stories of its existing structures. The way the city was built with temples and bazaars is exemplary in itself. On the North banks of the river Tungabhadra is the first capital of the Vijayanagar Empire, Anegundi, the temples and stories abound, which will help one to get a better understanding of the local heritage.

Breakfast at hotel. Later proceed for sightseeing tour of Hampi.

Visiting Vittala Temple dates back to the 16th century. The main gate has an impressive arch with carvings, and opens in a large courtyard which has the famous stone chariot in the center. The famous stone chariot, which has become an iconic symbol of the architecture of Hampi, is located inside the premises of this temple. The main temple is located just behind the chariot and has beautiful carvings. There are also several other smaller temples inside the courtyard, all of which are definitely worth a visit. The carvings on the walls/pillars of these structures depict various gods in different forms.

Lotus Mahal this visually appealing structure has two levels, with open pavilions at the bottom and balconies above. An elegant example of the fusion of the Hindu and Muslim style of architecture, the Mahal (Palace) derives its name from its beautiful, geometrically arranged cusped arches that resemble the petals of a lotus flower opening to the sun.

Queens Bath this structure has a very plain exterior but the interior is stunningly ornate with graceful arched corridors, projecting balconies, and lotus shaped fountains that used to spout perfumed water for ladies of the court.

Virupaksha Temple also known as the Pampapathi temple, it is the most famous temple in Hampi and dates back to the 7th century. It is dedicated to Lord Shiva and has beautifully carved walls, each telling a mythological story. The temple houses a shrine for Virupaksha and another for Sage Vidyaranya. Virupaksha Temple is an important shrine for worshippers of Lord Shiva. It is located on the south banks of Tungabhadra. The Temple, ever since its inception in 7th Century AD has never had a non-functional day, making it one of the oldest temples in an uninterrupted run in India

Anegundi Just across Thungabhadra River is the fortress town of Anegundi, predating Vijayanagar Empire and the city’s 14th century headquarters. Anegundi lies in the mythical kingdom of Kishkinda, ruled by the monkey King Sugriva of Ramayana. Anjanadri Hill near Anegundi is believed to be the birthplace of the monkey god Hanuman. Anegundi and its tranquil environs are dotted with forgotten temples and fortifications. The dilapidated HuchappaMatha Temple, near the river is worth a peek for its black stone lathe- turned pillars and fine panels of dancers.

After sightseeing tour return back to hotel. Overnight at hotel

Breakfast at hotel. After breakfast proceed for Badami.

Badami that occupies an important place in the heritage history of Karnataka. It is is well known for its great history and architecture. There are plenty of ancient temples, fort and historical places to visit in Badami. Badami is picturesquely nestled at the mouth of a ravine between two rocky hills.

The exquisite sculptures and sandstone cliffs of Badami bring forth many a tale from the yesteryears. Four rock-cut caves adorned with ancient carved pillars and bracket figures cut out of red sandstone is just a flight of steps away.

Breakfast at hotel. After breakfast excursion to visit Pattadakal & Aihole.

Pattadakal Temple Complex a complex of 7th and 8th century CE Hindu and Jain temples. Located on the west bank of the Malaprabha River a UNESCO World Heritage site build by Chalukya. The Hindu temples are generally dedicated to Shiva, but elements of Vaishnavism and Shaktism theology and legends are also featured. The friezes in the Hindu temples display various Vedic and Puranic concepts, depict stories from the Ramayana, the Mahabharata, the Bhagavata Purana, as well as elements of other Hindu texts, such as the Panchatantra and the Kiratarjuniya. The Jain temple is only dedicated to a single Jina. The most sophisticated temples, with complex friezes and a fusion of Northern and Southern styles, are found in the Papanatha and Virupaksha temples. The Virupaksha temple is an active house of Hindu worship.

Durga Temple Aihole an example of southern (Dravidian) architectural type, with a later northern type superstructure imposed upon it-an incongruity apparent from the fact that the superstructure is a square structure clumsily fitted over an apsidal cella. Huchamalli Temple Aihole home to shrines of Lord Shiva, Vishnu and Brahma. It was built in the 7th century AD and is considered one of the earliest groups of temples in Aihole. The sanctum is inclusive of a pradakshinapatha and a Northern style rekhanagara tower; and contains lattices on the external walls. Another small temple that dates back to the 11th century AD is situated to the north of this temple. At this temple, the entrance hall in front of the sanctum was introduced for the first time. Meguti Jain Temple the distinction of being the only temple in Aihole which can clearly be traced back to 634 AD. Perched above a small hill, this temple, though incomplete, represents the early development of the Dravidian style of architecture. Built without mortar, the Meguti Jain Temple placed is on a raised platform with a flight of steps leading to the large, pillared mukhamandapa. Ravanapadhi Cave temple Aihole the 6th century cave temple is dedicated to Shiva. A broken column lines up with the cave entrance, which opens to the southwest. The cave is dramatically recessed on a deep ledge, with free-standing shrines on either side.

Also visit Badami Caves Temples a complex of temples an example of Indian rock-cut architecture. Badami was the capital of the early Chalukyas, who ruled much of Karnataka in the 6th to 8th centuries. Badami Fort known for its beauty and rich history associated with Chalukyas and the Pallavas. Open Air Museum get a sense of the splendour of all three towns, visit a ‘natural’ National Museum in Badami. This is an area where the artisans tried out their art rock-cut steps, caves and incomplete idols tried out as a first draft are cordoned off here.

Breakfast at hotel. After breakfast proceed for Goa.

Upon arrival Check In at hotel. Rest of the day at leisure for independent activities

Breakfast at hotel. Full day at leisure for independent activities

Breakfast at hotel. Full day at leisure for independent activities 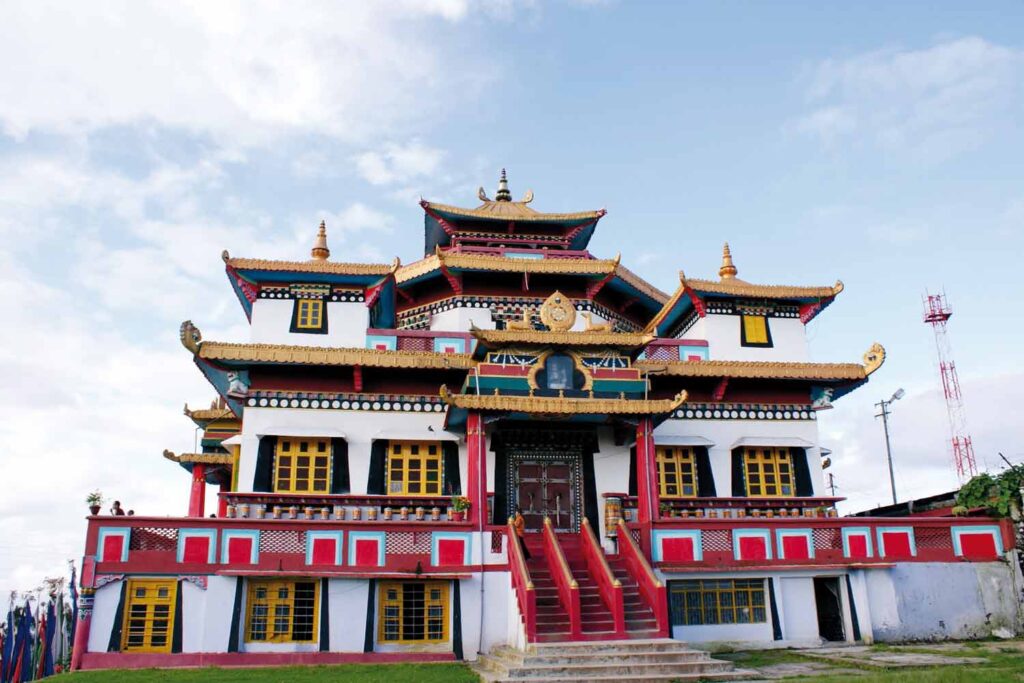